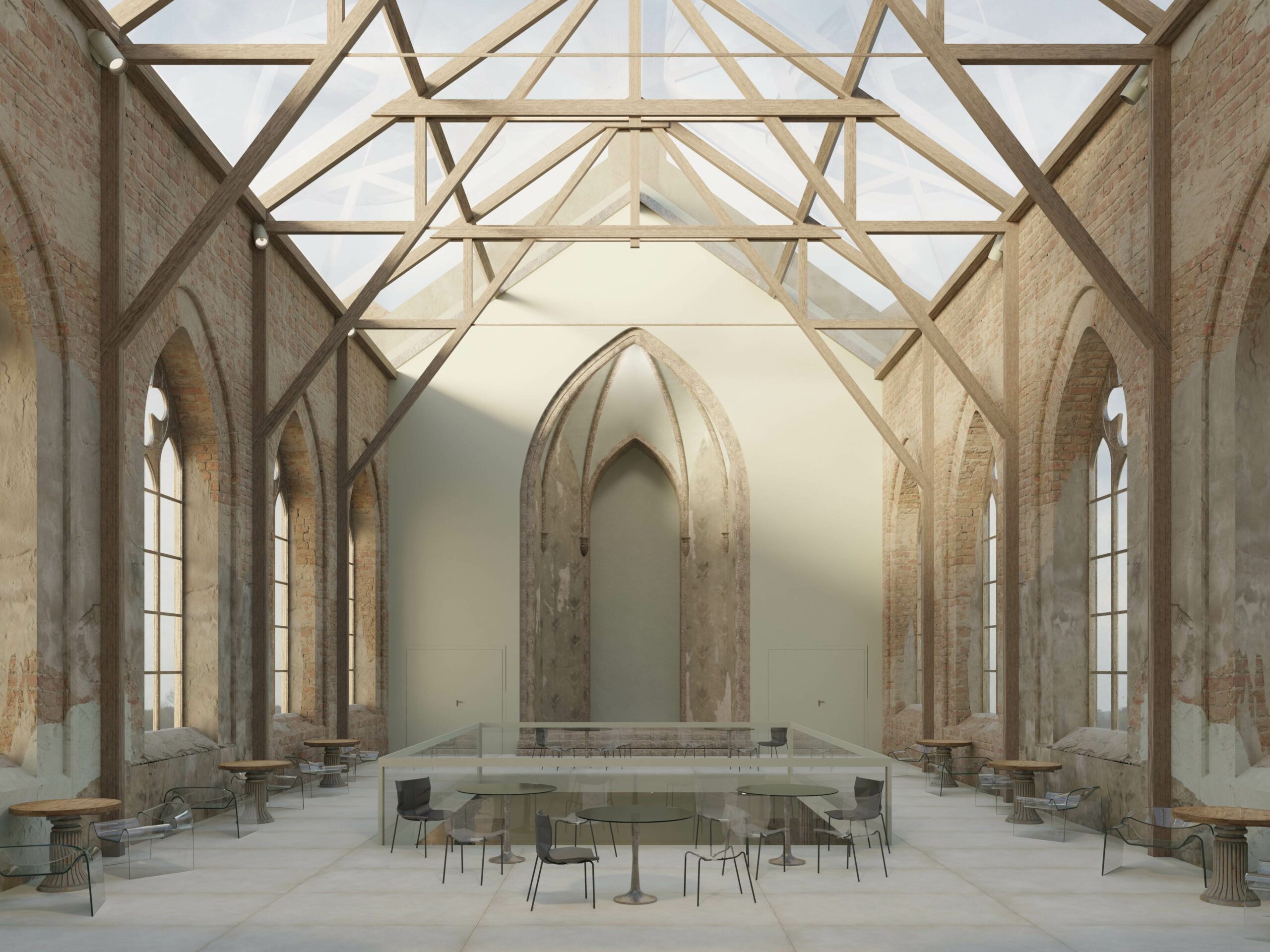 The last of the stages of the Tubądzin Design Awards’22 competition has already ended.

We are pleased to present the selected winners in the CultureFORM category.

The last stage confirmed the great involvement of the world of architecture in the design of the culture of a space, which resulted in the submission of twice as many works.

We present the WINNING PROJECT OF THE THIRD STAGE in the category CultureFORM
and projects that deserve to be recognized by the Contest Organizer and shown to the world.

“The project presents the adaptation of the remains of an evangelical church in Wroclaw, abandoned after World War II, dating from around 1853. After a building disaster in 1991, which resulted in the collapse of the roof, the building remains in ruins. The design is inspired by the site’s unusual atmosphere. The view of the open sky and the beauty of the old walls of the former church trigger creativity and encourages reflection and tranquillity. The designed contemplative space uses the potential of the place while respecting its history and climate. It responds to the needs of today’s busy man, nurtures his spiritual state and provides an opportunity to commune with culture, art, and nature. The interiors offer relaxation in the café, contemplation of live musical performances in the exposed area of the former altar, and sensitize the beauty of natural ageing materials. The project includes four floors: – a basement with toilets and storage facilities – a first floor that includes staircases, elevators, an exhibition space with a lounge area, and storage facilities – a floor that is a former church with a café and stage – a terrace on the roof of a chapel attached to the church, designed for relaxation in a green environment, overlooking the nearby Oława River.”

The competition organizer made an additional selection of works:

“The design of a crematorium complex with a columbarium and a ritual hall. The crematorium building is in the shape of a square, in which a circle is inscribed. Where the square is a symbol of order and symbolizes the four basic processes of life: four seasons, days, and four stages of life – childhood, youth, maturity, and old age. The circle is a symbol of heaven and the sun, infinity and eternity. It embodies and reveals the essence of eternity and finitude, their inseparable unity.
Through its creation, it shows the infinite in that and where the beginning coincides with the end. The main product choice for the facade and interior of the building is Tubądzin Group tiles. The idea of the interior is the coherence of the materials used on the outside with those we introduced into the interior design.” 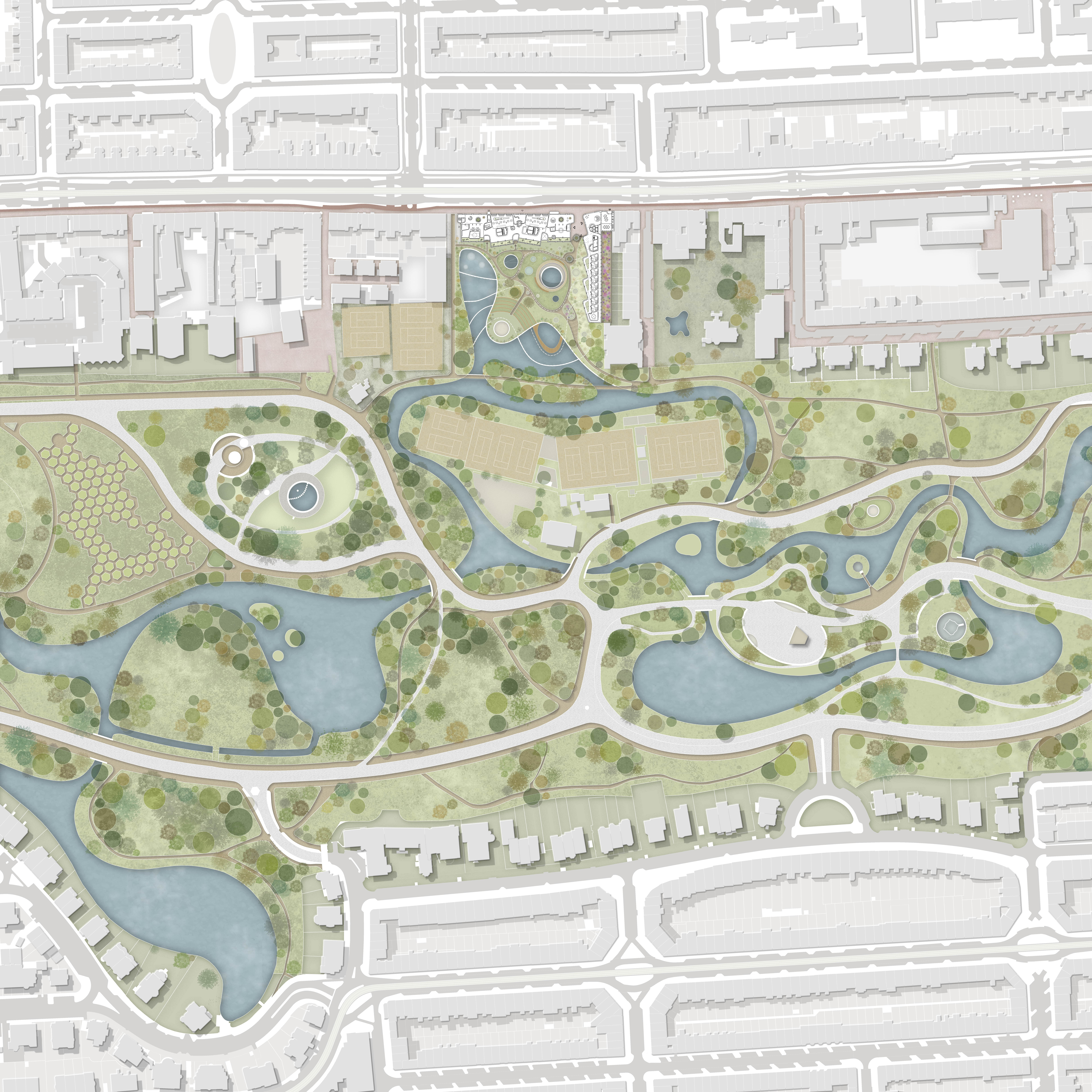 “Healing house is a graduation project and was started by a classmate who was diagnosed with a brain tumour. During her illness and rehabilitation process she encountered the limitations of the current healthcare architecture. Therefore she created a manifesto of healthcare, to improve healthcare buildings. Healing house is my reaction to the manifesto.
What if a patient designs the healthcare centre?
Healing House offers a different view on care. Where efficiency and medical technology form the basis of spatial plans in most care complexes, Healing House is fully reasoned from the patient’s perspective. The building has grown from the bed and spaces have been added step by step. The goal is to make everyone feel more human and less patient: every patient is unique and has its own needs.
The most important part of that is that Healing House is intertwined in the local culture. On the one hand it fits into the historically grown city street of the Overtoom in scale and material and on the other hand it fits into the local park culture of the Vondelpark. The park provided inspiration for the soft and continuous design language of the complex and the tiled spa in particular.
Due to the privatization of healthcare, many healthcare buildings have been designed as efficient machines, where the insurer determines the quality of vulnerable life.
In Healing house this is radically reversed: here the resident, their relatives and therefore the quality of life are key on all scale levels. “

“Daylight is an element completely independent of the designer, and yet, it is his main tool in shaping architectural thought. The relationship between light and material directly affects the perception of architectural form, regardless of its source. Whether natural or artificial, its occurrence should be considered on par with materials found in construction such as stone, brick, glass, and wood, as perfectly described by Steen Eiler Rasmussen in his book titled. “Feeling Architecture.” According to the Danish architect, “Light has great importance in the feeling of architecture. The same room can give the impression of a completely different space, depending on the size and location of its openings. Moving a window from the centre of a wall to the side will change its character.” It is not uncommon, when entering a given space, to create an emotional impression related precisely to the colour and intensity of the light, which the viewer is often unaware of. Licht Haus is a studio project of a building complex with exhibition interiors, aiming to show the emotional changes occurring in the viewer, depending on the interaction of daylight and/or artificial light. The complex envisions 6 zones: Light Center (A), Library (B), Immersion Room (C), Restaurant (D), Outdoor Patio (E), Underground Exhibition Hall (F), and Observatory (G). The premise of the facility would eventually be integrated into the area of Szczytnicka Island in Wroclaw.”

“Located on the Dniester River on the northern coast of the Black Sea, Akkerman is Ukraine’s largest and best-preserved Medieval fortress. It was built by the Moldavian ruler Stephan the Great, in the XV century AD on the remains of the ancient Greek city of Tyras. The fortress was attacked, conquered and strengthened many times in its tumultuous history, by the Goths, the Huns, the Mongols, the Genoese, the Moldavians, and later the Ottoman and Russian Empire. In light of the tragic war unfolding, this centuries-old monument that stood its ground despite all odds can become a symbol of resilient resistance and also a refuge for culture, as war endangers people’s lives and their cultural production alike. The project seeks to transform the fortress’ 13-meter-deep moat, an in-between space that has lost its original function, into a place that can shelter people, treasured belongings and artifacts from the dangers of war, letting culture manifest itself even during troubling times. A 600-meter sunken passageway is envisioned, pedestrianized and paved with Tubadzin polished porcelain tiles from the Onice Bianco and Boho Collections, whose aesthetics and chromatics are reminiscent of the water that used to fill the ditch. Flanked by a corridor garden, the zenithal light reflects the artifacts on the ceramic floor. Its thick pigmented wood and concrete walls are hoisted up with chains, like a fortress’ gate bridge, as the corridor opens to reveal its artifacts in times of peace.”