We announce the winners of the 1st stage in the CultureFORM category!

The high level of commitment to designing the culture of a surroundings manifested itself from stage 1 of the TDA competition in the CultureFORM special category. The submitted works showed how natural it is for the design world to use cultural heritage. The submitted works in the CultureFORM category show a diversity of approaches to the theme. From very intimate spaces to urban space objects.

The authors of the submitted works proved that it is culture that shapes our way of thinking about the world, broadens our horizons, creates values and provides important emotions.

We are delighted to present the winning project of the first stage in the CultureFORM category, as well as two projects that have been particularly distinguished and awarded by the competition organiser. 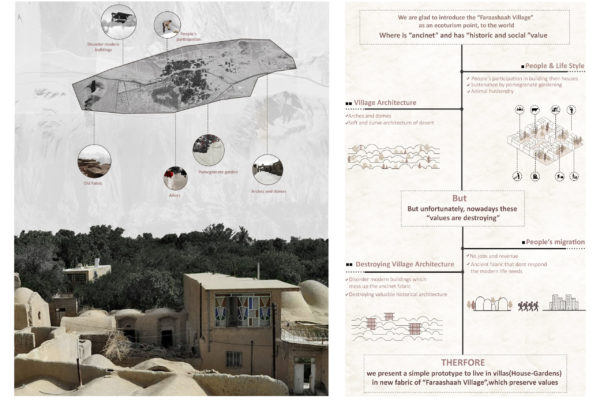 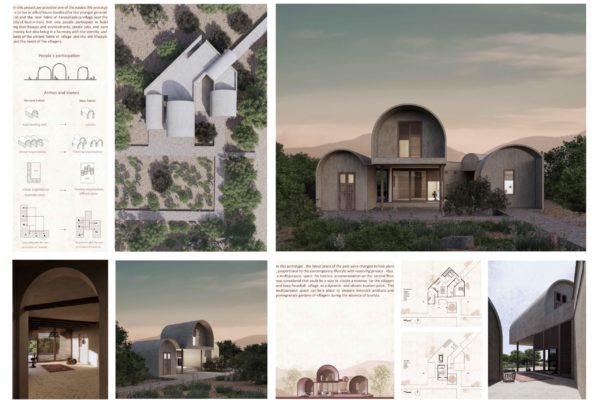 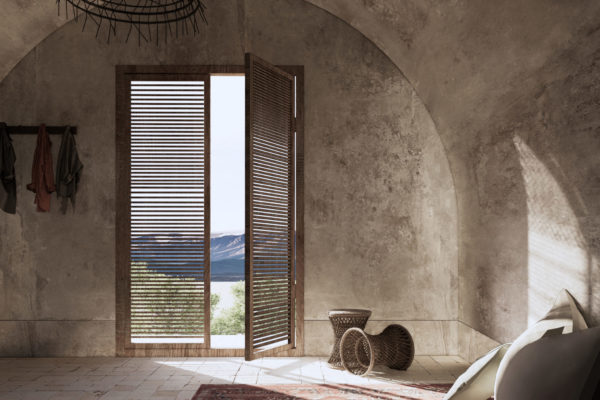 Faraashaah is an ancient village near the city of Yazd in Iran. Due to its proximity to the central desert regions, its architecture corresponds with the distinct characteristics of the desert; for instance, the shapes of arches and domes, the forms and color combinations of its architecture all portray a soft and humble expression.

Therefore, this village can be recognized as a global ecotourism benchmark because of its historical identity.However, a glance at the emerging problems in the historic rural fabric of Farāshāh reveals an ongoing lack of local participation in constructing the built environment, the rural landscape in this village has suffered enormous damage in recent decades because of automation and the construction of inauthentic buildings with no architectural reference to the original rural identity.

In this project, we provided one of the easiest life prototype for the construction of villas (garden houses) for the younger generation and the new texture of Farashah.

In this prototype , the linear plans of the past were changed to free plans, proportional to the contemporary lifestyle with reserving privacy. Also, a multipurpose space for tourists accommodation on the second floor was considered that could be a way to create a revenue for the villagers and keep Farashah village as a dynamic and vibrant tourism point. This multipurpose space can be a place to prepare livestock products and pomegranate gardens of villagers during the absence of tourists.

The organiser also decided to give two honorable mentions:

An award for the author of the honorable mention project: Dagegraphy – album – photographer Maciej Mańkowski, promotion in the Tubądzin Design Community, a personalised interview in Elle Decoration, publications in media, promotion on the website of the competition’s partners, promotion in the organiser’s social media and international promotion of the winning project. 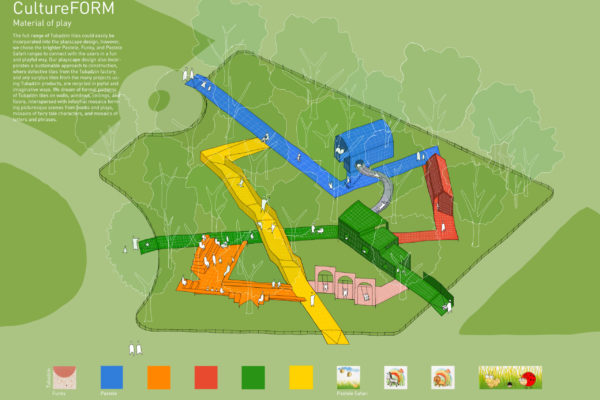 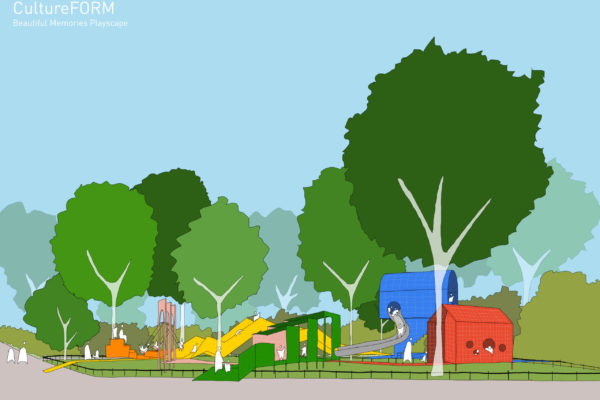 The world has been deeply moved by the recent mass migration of Ukrainians and the generosity of the Polish who have welcomed so many into their cities and homes.

Inspired by Roberto Benigni’s movie ‘Life is Beautiful’, we dreamed of a space that could incite moments of happiness in a time of darkness and uncertainty, a space where children can be children, and where parents from different cultural backgrounds might interact and develop cross cultural relationships.

An obvious point of departure was a playspace, thus beginning our journey to discover what CultureFORM can be, and how Tubądzin might collaborate in this process of discovery

An award for the author of the honorable mention project: Dagegraphy – album – photographer Maciej Mańkowski, promotion in the Tubądzin Design Community, a personalised interview in Elle Decoration, publications in media, promotion on the website of the competition’s partners, promotion in the organiser’s social media and international promotion of the winning project. 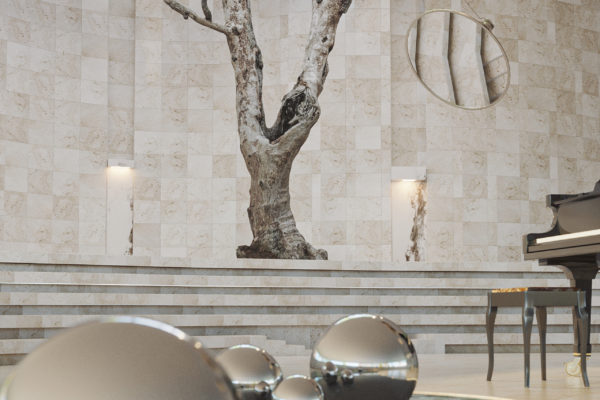 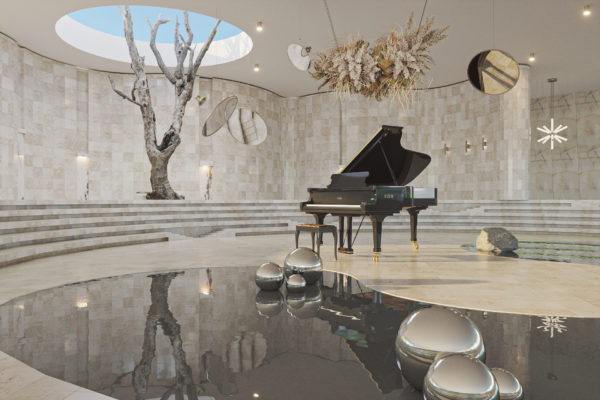 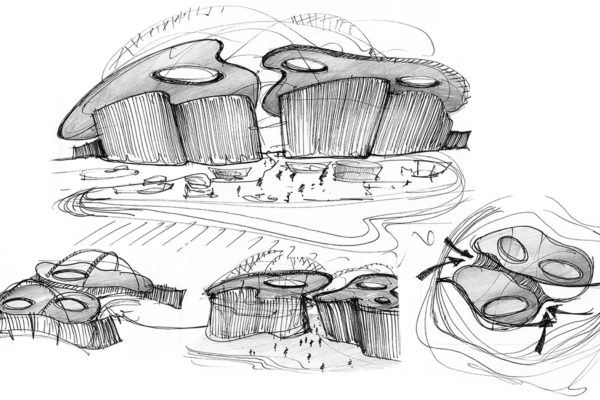 The scale of destruction during the war in Ukraine is still unknown. Its silent victims are the countless cultural assets of Ukraine, which today are estimated at 283 objects.

The task of cultural buildings is not only to provide us with visual and auditory stimuli, but above all to form our personalities, develop our imagination, inspire us to action, give us hope and build a civic community.

Recent months have not only made us more sensitive to what we have, but have also given rise to the need to give to others, to rebuild, to support.

New Mariupol is a concept of an open stage in a steel construction. Seen from above, it refers to the industrial character of the city while combining the industrial and the organic. The roof of the entrance space is based on steel load-bearing arches made of hot-rolled steel tubes of rectangular cross-section and varying spans. The structure is made up of numerous transoms and steel cables that are at the same time a technical and lighting platform.

The auditorium space comprises stone benches in a radial arrangement. The stage is integrated with the auditorium. It is a place full of light and space so that participants can immerse themselves in the stimuli provided. The choice of lighting is not random. The symbolism of the luminous, fiery starfish is very meaningful.

We will also show works by other authors presenting a particular message about the culture of space. You will find plenty of inspiration at the Tubądzin Design Awards.

You can find more about the winners and a full description of the ideas of the awarded projects at: https://tubadzincommunity.com/en/news/

Two weeks left until the end of the final stage of TDA 2022!

The last 3rd stage of the Tubądzin Design Awards is coming to the end – join the TDA2022 design community!